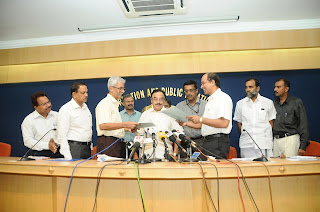 Thousands of students in Kerala will soon be able to scorch the asphalt on cyber autobahns, thanks to a Rs. 4-crore tie-up between the IT@School programme and Bharat Sanchar Nigam Limited (BSNL) to put in place a Virtual Private Network (VPN) over broadband for Govt/Aided  schools.
The VPN will be realised with a 100 Mbps leased lined connection supported by Multi Protocol Label Switching and with 20 Mbps bandwidth as its backbone. Seventy-five per cent of the project cost would be absorbed by the Union government under the ICT@School scheme. A specialty of the scheme is that BSNL is providing the VPN at one-fifth the market rates.
A memorandum of understanding between the government and BSNL was signed on  September 25, 2012 at a press conference called by Education Minister P.K. Abdu Rabb.
Education Secretary Shiv Shankar said at a press conference that the VPN would be up and running in about a month. The State government has claimed that this would be the first-of-its-kind network in the country for educational institutions in a State.
The facility would be given to 2,495 high schools, 1,236 higher secondary schools, 377 vocational higher secondary schools and 233 upper primary schools. Close to 300 offices of the Education Department — the offices of Deputy Directors, District Educational Officers, and Assistant Educational Officers, District Institutes of Educational Technology, and 35 Block Resource Centres in Kerala — would also be part of the virtual network.
The high-speed transfer of virtually limited data over the VPN throws open the possibility of real-time, online, collaborative learning for these schools.
The VPN would also enable students to seamlessly access ICT-enabled learning content and operate in a much more efficient manner the School Wiki.
Administrative functions such as the dissemination of examination results, operations relating to the single window admission system for Plus One courses, and transfer and posting of teachers can be made more efficient and fast using the VPN.
Posted by itschoolalp at 5:28 PM

Nice information, many thanks to the author. It is incomprehensible to me now, but in general, the usefulness and significance is overwhelming.